A video of Luke Carlin from Finaghy went viral on Facebook after a passer-by filmed Luke covering a shivering dog tied up outside the store in torrential rain.

Kind-hearted Luke used his own jacket to cover the dog, whose owner was shopping nearby. His good deed hit local and national press and the video was featured on LadBible and UNILAD. Luke was even interviewed by his local radio station.

Despite reaching over 3 million views, the video didn’t capture moments later when Lauren McCartan, who works in the same store, brought the dog inside to shelter it until the owner returned. Lauren said: “I’m glad I wasn’t in the video as I don’t think I could handle all the attention!”

Both colleagues received Iceland Service Awards for their heroic efforts. 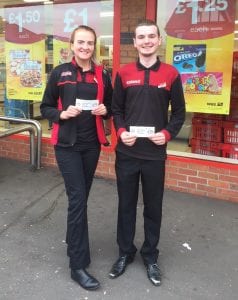