Alina Solomka was Iceland’s first Apprentice Store Manager to be signed off as the manager of her own store. After joining the business as an external apprenticeship candidate in October 2017, Alina now leads a team of 10 frontline colleagues. Since taking over the Sidcup store in May 2018, Alina has delivered significant improvements in the store’s sales performance, customer transactions and colleague engagement scores.

Alina was presented with the Apprentice of the Year Award by BFFF Chief Executive John Hyman and John Marren of Company Shop. 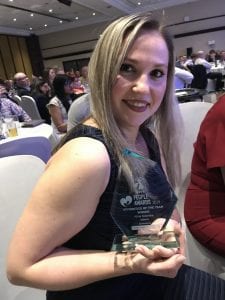