The Iceland Foods Charitable Foundation (IFCF) has donated more than £24m to good causes since 2005, and since 2011 has focused principally on supporting dementia research.

Our largest single donation of £10m was made to University College London (UCL) to support the development of the London Hub of the new UK Dementia Research Institute. We raised these funds through the sale of 5p single-use carrier bags in Iceland stores across England, Scotland and Wales. In addition, our Founder and Executive Chairman Sir Malcolm Walker played a leading role in creating the Dementia Research Retail Partnership of like-minded retailers which also pledged funds from carrier bag sales to the project, contributing a further £10m.

The critical role of these donations was recognised by UCL President & Provost Sir Michael Arthur, who noted that “Iceland’s own strategic philanthropy, and Sir Malcolm’s key role in establishing the Retail Partnership, have been a real catalyst for change and central to making the Hub of the UK Dementia Research Institute a reality. UCL is already – and as the Hub will continue to be – at the forefront of research into treatments and cures for dementia. As we lead a grand coalition of universities, charities, and industry partners, we have the opportunity to be truly transformational and to make real progress in the battle against this devastating disease.”

IFCF has also made substantial donations to Alzheimer’s Research UK and Alzheimer’s Society / Alzheimer Scotland, and has led the way in training all its 23,000 front-line retail colleagues to become Dementia Friends. We are proud that our fundraising efforts have helped to raise public awareness of the dementia epidemic and to improve understanding of those living with the condition. 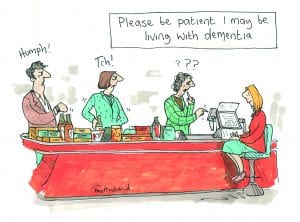